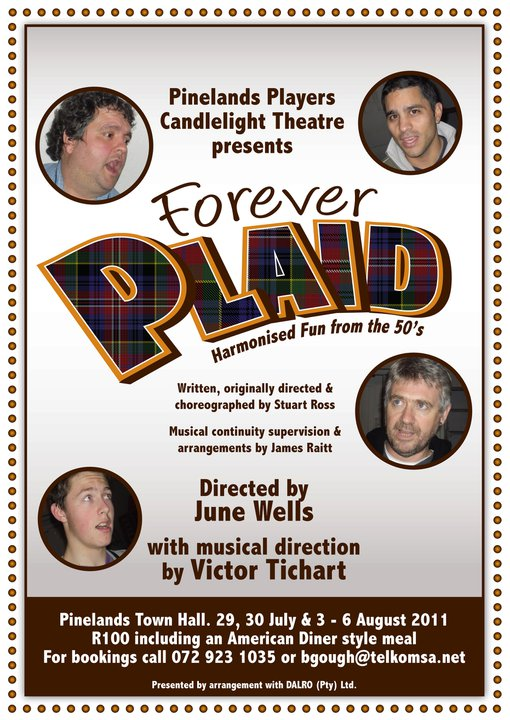 June Wells (director):  Sometimes auditioning a show can be hell when you’re a director. Making choices and having to let some people down is not always pleasant. Forever Plaid required 4 men who looked between 25 and 30; we needed a bass, 2 tenors and a baritone, they had to be able to move, act and blend together in harmony – I knew it was going to be difficult but I had no idea that I would literally have no choices.

When audition day dawned the only person to arrive was my friend who kindly came to support me. With sinking heart and not much hope, I re-scheduled the audition for the following week.

This time five guys pitched up. One I ruled out, he had a great voice but wouldn’t fit the age required. The other four had to be right, or the show would be cancelled, there were no options. Each auditioned well and looked just right; a little glimmer of hope.

Musical Director Victor Tichardt and I called them back a few days later to see how they sounded together. Victor taught them harmonies in the verse of one of the songs – ‘Heart and Soul’.

I remember sitting there with my fingers crossed and my heart thumping,  trying to look nonchalant while doodling on my notepad. Hearing harmonies being learnt is a bit like listening to an orchestra tune up, not like music at all.

Then suddenly I heard this fabulous sound as they sang together. There is something about a perfect harmony, it rings and your heart soars.

We had a cast, but not just any cast, the perfect cast! And what a super bunch of guys they were to create a show with. Thanks Simon Speck, John Lambrou, Chris Laurie, Richard White, Johann Botha and Victor for fabulous memories.

Chris Laurie (Sparky): My first show for Pinelands Players. I have been dreaming about doing a show like this for years. The very tight harmonies were probably the most difficult part to master. But thanks to Victor and the brilliant rest of the cast, this was accomplished. Working with June made the most difficult things look easy, even the choreography. A crazy, fun time all round!